An influential Theory of Group Dynamics was published by Dr Bruce Tuckman in 1965. His model consisted of 4 stages: Forming Storming Norming Performing. He added a fifth stage, Adjourning, in the 1970s. The Forming Storming Norming Performing theory is an elegant and helpful explanation of team development and behaviour. Similarities can be seen with other models, such as Tannenbaum and Schmidt Continuum and especially with Hersey and Blanchard’s Situational Leadership® model, developed about the same time.

Tuckman’s model explains that as the team develops maturity and ability, relationships establish, and the leader changes leadership style. Beginning with a directing style, moving through coaching, then participating and ending in delegating and almost detached. At this point the team may produce a successor leader and the previous leader can move on to develop a new team.

High dependence on the leader for guidance and direction. Little agreement on team aims other than those received from leader. Individual roles and responsibilities are unclear. Leader must be prepared to answer lots of questions about the team’s purpose, objectives and external relationships. Processes are often ignored. Members test tolerance of system and leader. Leader directs.

Decisions don’t come easily within the group. Team members vie for position as they attempt to establish themselves in relation to other team members and the leader, who might receive challenges from some team members. Clarity of purpose increases but plenty of uncertainties persist. Cliques and factions form and there may be power struggles. The team needs to be focused on its goals to avoid becoming distracted by relationships and emotional issues. Compromises may be required to enable progress.

Agreement and consensus largely forms among the team, who respond well to facilitation by leader. Roles and responsibilities are clear and accepted. Big decisions are made by group agreement. Smaller decisions may be delegated to individuals or small teams within group. Commitment and unity is strong. The team may engage in fun and social activities. The team discusses and develops its processes and working style. There is general respect for the leader and some of leadership is more shared by the team. Leader facilitates and enables (similar to the Situational Leadership® ‘Participating’ mode).

The team is more strategically aware; the team knows clearly why it is doing what it is doing. The team has a shared vision and is able to stand on its own feet with no interference or participation from the leader. There is a focus on over-achieving goals, and the team makes most of the decisions against criteria agreed with the leader. The team has a high degree of autonomy. Disagreements occur but now they are resolved within the team positively, and necessary changes to processes and structure are made by the team. The team is able to work towards achieving the goal, and also to attend to relationship, style and process issues along the way. Team members look after each other. The team requires delegated tasks and projects from the leader. The team does not need to be instructed or assisted. Team members might ask for assistance from the leader with personal and interpersonal development. Leader delegates and oversees.

A similar, but also useful model, was suggested by Gerald Corey (before a group could progress to a deeper level to work together), they should experience a transitional phase:

Initial Stage- Orientation and exploration: In this stage the cohesion of the group is required to move from initial to transition, within an environment of trust, established with explicit and implicit norms. “For a group to meet the working stage it is essential that members make a commitment to face and work through barriers that interfere with the group’s progress.”

Transition Stage-Cohesion: This stage is about recognising group problems such as conflict, anxiety, defensiveness, challenges to or conflicts with the leader.

In this stage the reluctant behaviour and the defensiveness is a normal way of interaction. Members in the group are trying to protect themselves from anxiety and from the risk to trust in the other members of the group. Members are proceeding with caution.

Working Stage: Is characterised by the commitment of members to explore significant tasks.

Characterised by member’s commitment to explore significant problems that they bring to the group and by the attention they pay to the dynamics of the group. The leader’s structure and intervention is lower than at the initial and transitional stages.

Greater cohesion evidenced by increased self-disclosure, giving and receiving feedback, discussion of here and now interactions, confrontation, turning insight into action. It is essential that members make a commitment to face and work through barriers that could interfere with the group progress.

Not all the groups reach a working stage, if they don’t develop enough trust between them, they can get stuck in the transition stage.

Leader functions- provide a structure that enables participants to clarify the meaning of their experiences in the group and to assist members in generalising their learning from the group to everyday life.

Main task members have to face when the group will be separated, is consolidating their learning and transferring it to the outside environment: 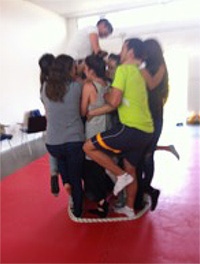 Objective: This activity is a team game that can help you to add new members to the group to develop problem solving and communication skills.

Contents: You have to build and improvise a “boat” on the floor with some pieces of wood, carpet or any other resource you may have, for example: foam tiles.
Once all the pieces are on the floor, the team has to try to place at least one of their feet on the “boat”. When all the members are in the boat, the leader of the activity starts to take away pieces from the boat. After each time the leader takes out a piece, the team has to readjust themselves. Any time that one of the members steps out of the boat, will be the end of the game.
The aim is to keep the boat with the largest number of members inside, until the leader decides that is has finished. The end of the game will be once the boat is without members, or with a specific number of members (3, 4,).

At the end of the activity, members of the group will discuss with the leader how they were feeling during the process, if they felt supported or not by them.
It is important to listen to all the voices and the roles.

Material: Wood, carpets, pieces of paper, strings or any material to build the “boat”.

view/hide content...
The Big Bang School, was a school where the group of teachers and administrators had never worked together before; this represented a big challenge. Regardless of age or experience, most of the teachers were new to team teaching and collaborative decision-making processes. Even with one year of planning, it was a chaotic opening year. The Director could see that something needed to be done to enable staff members to rise above destructive communication patterns that came from a sense of helplessness and fear. They had small learning communities, but they didn’t have the staff-to-staff relationships built upon trust. It was a very strong staff team who didn’t know each other.

The Director wanted effective communication between staff members, to demonstrate that students’ emotional safety is critical for their learning, as well as the development of positive staff and student relationships which is crucial to create a culture of mutual trust and respect.

In order to engage all the staff working in the school, the Director involved them in group dynamics, thus building trust between them. This occurred in small and weekly groups.

The Director noticed a change from the first year with the new approach implemented over three years. Once members of staff felt comfortable laying their issues on the table where they could be discussed, they were able to construct a common vision of schooling. Students were benefitting from a more positive environment, helping everybody to row in the same direction.

This approach has been used extensively by practitioners and with great success, as the experience of the process reinforces the theory and completes an effective learning journey.