view/hide content...
Language is a complex system and a big challenge for every child. A three year old child should be able to talk in complex sentences with correct main and sub clauses. Children start to use tenses like past and future, and discovers the question words. Until the sixth Birthday a child should use about 5000 words. In particular, children know generic terms like “fruits” and abstract words like “happiness”. They should be able to count up to ten and to speak faultlessly. Between five and six years old, children generally recognize rhymes and start forming them. The interest of letters should motivate a six year old child to write his name.

So far the average child. But what if not? What if a six year old child still uses baby talk? What if the child searches every word and is not able to talk in a fluent, correct sentence? Language development of every individual child is different. But at a certain time the language delay is obvious in comparison to other children from the same age group. Parents start to worry and dislike statements like „she/he is just a late bloomer, don’t worry, she/he won’t stop talking later on!“ . But when exactly is the point to start worrying and to think about taking it more seriously?

According to the American Speech-Language-Hearing Association „more than one study has indicated that the older the child at time of diagnosis, the less positive the outcome. Obviously, older children in a study have had a longer time to bloom than younger children but have not done so, indicating that the language delay may be more serious.”

The language development determines the whole future of a child, such as the possibility of getting diplomas, good jobs, and having self-assurance in the daily life. Thus it is obviously a topic to be taken more seriousl when a child has reached a certain age. As in any other delay within development, the reason and classification can be diversified and be a mix of several circumstances and challenges.

1. The kind of impairment

2. The affected area of disorder

4. The time of appearance

First of all the affected area of disorder needs to be identified: Language for example does include the pragmatics (the general communicative skills) as well as phonology, the lexicon (amount of words known), the morphology (word formation) and the syntax (sentence structure).A next diversification is the kind of disorder, which includes receptive and productive skills. The receptive skills mean a general understanding of words and content, but not the understanding of the meaning of the words and the whole sentence. This is visible if orders are just partially followed and fulfilled as a child understands single words but not the full content of the sentence. A disorder in productive skills can be visible in cases of not been able to formulate full sentences and have moments of silence not able to expresshim/herself.

Another point one needs to be clear about is the origin of the delay: A primary origin for example means that the delay or even disorder of language development is a single difficulty and not part of multiple difficulties. This primary origin excludes generally any neurologic disorder as diminished intelligence or sensory disorder. The contrary would be the secondary origin in terms of functional or organic, which includes a delay or even disorder due to a hearing impairment or mental and/or physical handicap. Even when the origin has been treated it happens that the delay or disorder of language development stays and doesn’t stop as an automatic results.

Even the time of appearance needs to be classified between a development disorder and a disorder which appeared after the development of language.
The second one appears after the full development of the language and can be caused for example due to an accident and/or severe illness affecting the ability of speaking. This, like all the other reasons for delays can only be assumed and need further examinations.

As classified above language delay might affect different areas, have different origins, different kinds of disorder, and a different time of appearance. It therefore needs to be addressed in different ways, but not everybody might have the professional background of addressing the above listed characteristics. As mentioned at the beginning a normal language development includes certain steps at a certain time. A delay might have far-reaching consequences for the whole life and the curriculum of a person. Thus a language delay should be taken serious from the start and it might even be advisable to contact a speech therapist as soon as a delay is noted by parents or teachers.

view/hide content...
As multiple as the symptoms are described in the theoretical part, as multiple are the treatments necessary. As several of the symptoms need to be treated by specific experts, the following activities proposed here do address minor delays and can be seen as supportive and additional activities to be easily implemented with groups of children by the staff working with these children. The best ways to support language development is currently realizing activities together, such as reading, talking, but also integrate other senses and regions of the brain with singing, moving, and painting. Although it needs to be underlined here that the following activities can’t be seen as a substitution to professional experts’ treatment.

Objective: To train the ability of speaking, of explaining, and of connecting one word with another one. It therefore tackles several of the previously mentioned challenges.

The most important is here to enhance the children to speak up, train their language skills and to involve themselves into the process, giving you a first idea of their skills in terms of language (pragmatics, phonology, lexicon, morphology, syntax), speech (phonetic / articulation, fluency), and voice. This activity can be played endlessness or be integrated in between other activities.

Contents: An Elevenie is a short poem with a given pattern. It is mostly taught in primary school with the objective to develop communication and writing skills in a creative way. It is a playful, interactive way to connect one word with another. As a result the children wrote their own poem, what may motivate especially children who have little self-esteem towards their language skills. The Elevenie contains eleven words which are arranged in a specified order over five rows. Each row has a requirement that can vary.

During preparation of the poem you should talk with the children and ask questions to develop the rows, especially if they´re stuck and don´t know what to write next.

Title: I do see something, you don’t see

Objective: To train the ability of speaking, of explaining, and of connecting one word with another one. It therefore tackles several of the previously mentioned challenges.

Contents: Have a look around, decide (in mind) for one specific object and tell the group “I do see something, you don’t see and it has … a green colour” the children have to find out what it is, while you’re just allowed to answer with “yes” or “no”. As soon as the answer has been found, the winner decides for one specific object, starting the game from the beginning.

The most important here is to enhance the children to speak up, train their language skills and to involve themselves into the process, giving you a first idea of their skills in terms of language (pragmatics, phonology, lexicon, morphology, syntax), speech (phonetic / articulation, fluency), and voice. This activity can be played endlessness or be integrated in between other activities.

Title: Who am I

Objective: To train the ability of speaking, of explaining, and of connecting one word with another one.

Contents: Hand around small papers, adhesive tape and pens and ask each person of the group (including yourself) to think on one popular person (film star, character of a cartoon, musician, teacher, etc.) she/he’s sure the person on the left next to her/him knows. The name needs to be written down on the paper without saying it loudly or that anybody else might see it. Ask each person to use the adhesive tape to stick the paper on the forehead of the person sitting on the left next to her/him. The result is that each person of the group has a paper stuck on his forehead with a name written on it everybody else except her/him can see. You can start with asking for example „Am I male?“ and the group answers „yes“ or „no“. If it is „yes“, you may ask a second question, which can be always only be answered with „yes“ or „no“. As soon as one of your questions is answered with „no“, it’s the turn of the person sitting on your left to aski their questions. The goal is that each person finds out who she or he is. In comparison to the previous activities it is a more complex activity requiring more time.

The most important aim here is again to enable the children to speak up, to train their language skills and to involve themselves into the process, giving you an idea of their skills in terms of language (pragmatics, phonology, lexicon, morphology, syntax), speech (phonetic / articulation, fluency), and voice.

Note: To be adapted for preschoolers.

Objective: to enhance children’s ability to develop connections and articulate a coherent story.

Contents: First you copy a picture story and cut it into pieces. Now the children shall put the pictures in a correct order and explain what happens in this story. As mentioned above it is always important to ask questions while working with the pictures: “Why do you think this picture comes first”, “Have you ever built a snowman in your life?” Especially questions about the life of the children motivate them to talk, which is the best way to develop language and communication skills. Also it makes the child feel good to notice that someone is interested in their life and spends time asking and listening to them.

Example of a picture story free to copy on: https://bildergeschichten.plakos.de/ 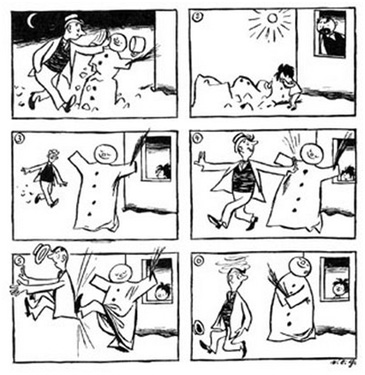 Obviously the most important language trainings include talking, listening, and writing. It´s commendable to connect the activities with painting, singing, and moving to integrate all regions of mind and body. A simple exercise like reading a story while the children are painting a picture is even useful. After reading you can ask questions about the story connected with the daily life of the children, like “Has anything similar happened to you?”. Then the children may talk about what they have painted. Time to talk is irreplaceable for language development.

Not regular training with the proposed activities or comparable ones will diminish delays in language development but won’t be the solution in severe cases of delays. A regular contact with professionals and the parents will be necessary to find the best solution for the child to catch up with her/his peers.

view/hide content...
Maria is a six year old child who has difficulties to integrate into the class and stays alone for most of the time. When the teacher tries to integrate her into the group work and asks specific questions, she gives only short answers but she never speaks in full sentences.

The teacher notices that she often uses incorrect grammar and pronounces the words in a wrong way. The teacher consults his colleagues and they propose to get in touch with the parents – as even they have realized the difficulties of Maria.

Unfortunately her parents are always very busy and refuse all invitations by the teacher, so the teacher doesn’t have any chance to speak with them about Maria. As she just moved to the city there’s no further information from any other experts.

So the teacher does not even know if this problem of almost not speaking is preexisting or just caused by to difficulties in integrating herself into the new environment.