view/hide content...
Although each person has nowadays their own understanding of the term of bullying and is aware of the relevance and possible consequences of it, the topic is relatively new.

Originally it was used by the zoologist and the medical Nobel laureate Konrad Lorenz to describe the behavior of a group of animals attacking one single animal, mostly because of rivalry of food. In the 1990s Swedish medicals started to use the word of bullying to describe frequent animosities among children and fellow workers. Some of their patients showed severe physical and mental sufferings after being shamefaced and offended as a single victim by a group of people for at least once a week for at least six months.

Nonetheless, still there is no unitary definition of bullying, but the U.S. Department of Health & Human Services describes bullying in the following way: “Bullying is unwanted, aggressive behaviour among school aged children that involves a real or perceived power imbalance. The behavior is repeated, or has the potential to be repeated, over time. Both kids who are bullied and who bully others may have serious, lasting problems. In order to be considered bullying, the behaviour must be aggressive and include: An Imbalance of Power: Kids who bully use their power—such as physical strength, access to embarrassing information, or popularity—to control or harm others. Power imbalances can change over time and in different situations, even if they involve the same people. Repetition: Bullying behaviours happen more than once or have the potential to happen more than once. Bullying includes actions such as making threats, spreading rumours, attacking someone physically or verbally, and excluding someone from a group on purpose.”

Bullying affects everyone – those who are bullied, those who bully, and those who witness bullying. Even it´s an unanswered question: “If one person attacks me and a group is watching, how many people are bullying me?”

In order to underline the relevance of bullying, the appearance of bullying has to be taken into account as according to World Health Organization statistics researches in 40 developing countries showed that an average of 42% of boys and 37% of girls already do have made experiences with bullying.

The bullying phenomenon is mostly observed in working places and schools. The reasons of bullying in schools are manifold. One important factor is the satisfying feeling of power. Kids who bully, enjoy the feeling of domination and therefore bullying is linked with positive feelings. It is also used as an outlet for aggressions, which can be caused by problems at school, in the family, in love life or in other sectors. Especially at school it can be noticed a high level of competition which may cause the fear of failing. To act out ones aggressions and fears of failing, the preferred victim is a person who won´t show resistance. Instead of experience the feeling of failure at school, the one who bullies can enjoy the feeling of being the winner. Furthermore persons who bully oftentimes have had experiences as a bully victim in their past. Bullying in this case transforms the prior feeling of helplessness into the feeling of power.

Bullying is happening in many different ways, some of them can be summarized in different types of bullying, like

When talking about the effects of bullying there is a scale of two extremes: victims who are strong enough to protect their selves of psychical and/or physical damages and are able to create a distance to the act of bullying itself, and victims who are falling in depressions, sometimes even until the point of suicide. Most victims are between these points of effects.
Bullying usually causes short term and long term physical and/or psychical damages. But only the multiple reported cases of death associated with bullying have led to legislative initiatives around the world.

In order to prevent such forms of behavior the scientific literature and the WHO both suggest that preventative interventions should include whole community awareness campaigns about the nature of bullying and its dangers.

It might be said that this is not happening too often in preschools, as in this environment the children are mostly still very much protected. In case signs of bullying occur there is normally enough space and time to prevent that it goes deeper damages occur.

Address prejudices and misunderstanding people might have about diversity.

Being different but having things in common

Ask children to form a circle and each person who agrees to your question should do a step forward into the circle, but goes back to the original position for the next question. If a person doesn’t agree, she/he doesn’t move for that question. Read the following sentences (sentences can be adapted to local circumstances if necessary), let them do their steps, but don’t comment on their choices:

The technique can be followed by an official definition of bullying or a short film, having children answers in mind but still not commenting on their choices (unless someone wants to). By doing this the children will learn more about the dangers that are connected with bullying even by not commenting their answers.

Ask the children to sit down and listen to the story carefully:
“While searching for a lost calf, the Cowboy roams the steppe and suddenly stands in front of a Red Indian. Both stop walking wonderingly and look each other up and down until suddenly the Red Indian points a finger at the Cowboy. The Cowboy imitates the gesture quickly, but he points at the Red Indian with his outstretched arm and two fingers. No one says a word. Presumably they wouldn’t have understood each other. Suddenly the Red Indian puts up his hands and forms a triangle with his forefingers and thumbs.
The Cowboy only waits one moment and replies with his left hand which he moves like a wave and very fast towards the Red Indian. Perplexed he waits shortly, turns around abruptly and disappears in the steppe as quietly and silently as he has come. 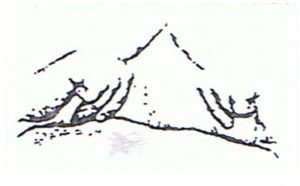 In the evening, after he has caught his calf again, the Cowboy arrives at home and tells his wife: “Today I’ve met a crazy Red Indian. Suddenly he stands in front of me from nowhere, points an outstretched finger at me and wants to shoot me. I point two fingers at him and say to him with this gesture: If you want to shoot me, then I shoot you twice. Then the Red Indian gets cheeky and tells me to better go home. So I’ve shown him who is the strong one and said that he better abscond otherwise he would see! You should have seen that, he disappeared in a jiffy, as if the earth has swallowed him up…
Nearly at the same time the Red Indian gets to his teepee searches for his wife and tells her: “Today I’ve met a really weird Cowboy. First I asked him what his name is and he answers “goat”! And as I ask “mountain goat?” the weirdo truly answers “No, not mountain goat, but river goat”. After that I’ve said to myself that Cowboys have a nut loose and I’ve made off quickly and quietly…”
This story shows that misunderstandings and a misleading communication can result in non-common views of another person who is different to yourself, a topic which can be further deepened here.

The man with the hammer

A man wants to hang up a picture. He has got a nail, but no hammer. The neighbour has one. So our man decides to go across and borrow it. But here he begins to have doubts: And what if the neighbour doesn’t want to lend me the hammer? Just yesterday, he gave me such a hasty greeting. Maybe he was in a hurry. Maybe he pretended to be in a hurry and is angry with me. About what? I didn’t do anything to him; he imagined something. If somebody came to borrow a tool from me, I would give it to him immediately. And why not him? How can you refuse such a simple favour to a fellow human being? Persons like this guy poison your life. Also he thinks that I depend on him, just because he has a hammer. That’s enough! – And so he rushes across, rings the bell, the neighbour opens the door, but before he can say “hello“, our man shouts at him: “Keep your hammer, you idiot!”
(from Watzlawick: Instructions on How to be Unhappy, Munich 1983)

One person is sitting on a chair and get´s a „warm shower“of all the other kids. Every child comes in front of the chair and says something nice to the person, like “I like your T-Shirt”, or “You helped me out when I asked you for help”.

The giraffe has got a big heart to pump the blood into the head. That’s why the giraffe symbolizes love, warmth and geniality. The wolf symbolizes rough manners and cruel behavior. The teacher tells different situations, like „You forgot your pencil. Ask your neighbour if he can lend you one“and the children ask the question in Wolf-Talk and Giraffe-Talk.

Note
There are more small exercises and films about bullying, a topic which especially if cases had been witnessed in your own environment should be regularly addressed. But even if bullying is not a topic with your children yet, all of the activities proposed here can be used as preventive action in order to train the children awareness of prejudices and bullying.

view/hide content...
Casper is a seven year old child admired by his classmates. He is having a strong personality and doesn’t have any difficulties in stating his opinion. One day, a colleague is contacting Casper’s teacher telling him that he has seen Casper and his friends to make fun of a girl wearing old clothes. The colleague went to Casper and his friends and they immediately stopped making fun of her. When the colleague asked what is going on there, the girl said, that they’re just playing and that there isn’t any problem.